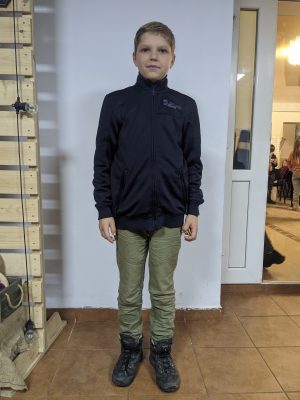 My name is Andrii, I am thirteen years old, and I live in Lutsk. I don’t have a father as he passed away. My mother doesn’t have a job. I have three brothers and one sister. Ivan, Oleh, and I were born are triplets. I have a lot of friends: Nikita, Mark, Denys and Yuliia. They are my friends because we spend a lot of time at church together. Yuliia is older and I can talk about everything with her. We play with snowballs and other games outside together. I celebrated Christmas at church. I am happy when summer holidays come, so then I can go biking and swim in the river. I am a seventh-grade student and I get to school on foot. I spend about three hours at school and I also study at home online. I like breaks at school when I can play with my classmates and I don’t like that we don’t have art classes now, as it is my favorite subject. I like eating fruit, meat, and salads. On holidays, my mother cooks something special – sandwiches. I love reading the Bible when I have free time. I dream of becoming a bricklayer, carpenter, artist, and construction worker. I would like to get to know you better and I look forward to receiving a letter from you.

Andrii is sincere, kind and has a lot of friends. He has difficulties studying at school but he gets along with people really well and has leadership qualities. Andrii also reads the Bible. His mother raises four minor children alone. Besides that, Andrii`s older sister has a baby and lives with the family. The children are all from different fathers. The mother was married to her last boyfriend and they had triplets. Andrii is the youngest of the triplets. Both his mother and father abused alcohol. Later his father died of cancer but before his death he prayed to Jesus. Since his death, the mother has been trying to live a different life. She was in an alcohol treatment center where they treated her alcohol addiction. The parents` lifestyle had a bad influence on the children; they swore a lot, smoked and even tried alcohol. They wouldn`t obey anyone. At one point, the youth from the local church visited them and cleaned their apartment; they threw away the garbage that the family had accumulated over the years, installed a new toilet, etc. They also started helping them with clothes and food. Thanks to their help, the children began to attend church. Andrii attends church most often of them. He has changed a lot: he reads the Bible, sings in a choir, goes to Sunday school, and attends meetings for teenagers at church; he no longer smokes or swears. The family`s financial situation is extremely difficult. Due to her lifestyle, the mother has poor health and cannot work. Moreover, she got used to living at the expense of men she had a relationship with. She is currently in a relationship with a man who is at war now, and he sends her small amounts of money from time to time. She does not receive any state allowances. The church is also of great help to them. The family lives in a small one-room apartment. There is little space, so the children often quarrel with each other. Their living conditions are poor. This may be the reason why Andrii constantly looks for the opportunities to spend time at church. Andrii and his family really need your support which will show them how much God loves and takes care of them. It will also open their hearts to the Word of God. How great it will be when Andrii knows that you are his sponsor.