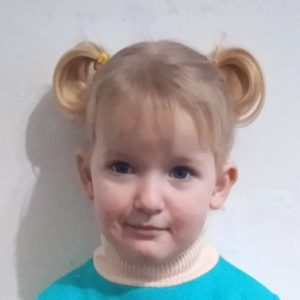 My name is Lilia, and I am four years old. I live in a picturesque village, which is in Lviv Oblast. I also have four older sisters. Tania is 19 years old and she is still studying to become a food industry technologist. She is also a teacher in our church’s Sunday school. Antonina is 16 years old and studies at the vocational school for her second year to become a confectioner. She has graduated from music school and has learned to play the violin, but she has also learned to play the guitar by herself. She likes playing the guitar more. Olia is 14 years old and she is a ninth-grade student, and she has also graduated from music school with a degree in violin. She loves this musical instrument. She can play many songs by ear, and they learn new Christmas and Christian songs with Antonina. Tania and Antonina are still studying to become teachers in Sunday school. Luba is 11 years old and she is a sixth-grade student, and she loves singing and drawing. She likes horses the most, both toy and real. I love my sisters and they love me too.

I like playing with my toys, drawing, riding a scooter, and singing. I have two cats – Murchyk and Ponchyk, and it is very fun with them. I can already help my mother with something, as we are waiting for one more little brother to be born. In summer, I like running on the grass and helping my mother take the cow to graze. On holidays, my sisters, mother and I like to go for a walk in the mountains or fields, where there are a lot of beautiful flowers and butterflies. We can organize little picnics, and pick up big bouquets of medical flowers while returning home. The mother is a tailor of outerwear by profession, but as it is difficult to find a job in the village, she has worked as a postwoman, after that as a younger nurse in the hospital, and she will go on maternity leave soon. We read the Bible in the evenings with my mother, as we believe in a Living God and we put all our hope in Him.

We rarely spend time with our father, as he is always working, and after work, he is with his friends. There were days when we went fishing together, and we were happy that we had the opportunity to spend at least some time with our father. In summer, he took us to the sea, and that was an unforgettable time when the whole family was together for 10 days. The mother believes in God, and the father doesn’t, it was difficult for us. The mother prays a lot for us and our father. Thank God, this summer Tania and Antonina gave their hearts to the Lord and were baptized. The father caused a big fuss when he found out that, but my sisters went through it with God’s help. The father refused to provide for them financially (to pay for the apartment, nutrition, and clothes). We placed all our hope in God, as He has been helping us for all this time, so He won’t leave us now. Before Christmas, thanks to the church members’ and mother’s prayers, God showed a way to the church for us too. The father was very offended that he was betrayed by everyone. He is ashamed that his children go to Evangelical church. He left us, and now we are with our mother and with God. It is written in the Bible: “Believe in the Lord Jesus, and you will be saved—you and your household.” So, we believe, that our father will also get to know the Lord. We are thankful to God that we can read the Bible without a fear and go to church. God never leaves His children. And He is never late, He has everything under His control.

Dear Sponsor! I am sincerely thankful that you help my family and me. May God abundantly bless you and give you much more! We believe that the Lord helps us through your kindness and sincere heart. “The Lord is my shepherd, I lack nothing.” We are sincerely thankful and we are looking forward to your letter. Please, tell us a bit about yourself, it would be very interesting for us to know about the person through whom God helps us so much.

With respect and gratitude,

(The letter was written by Lilia’s mother, as Lilia is still small)

Lilia is an independent, diligent, sociable and active girl who quickly finds the common language with her peers. Lilia likes riding a scooter, exercising, singing, reciting poems, and making up fairytales. She helps her mother. Lilia is also very sensitive: it has been emotionally difficult for her to endure the antics of her father. Mother came to God through despair and disappointment. She was baptized in 2004. Her husband was against that and did not allow her to go to church. Several months ago, when he found out that his older daughters got baptized as well, he left his family and started abusing alcohol more. Now his daughters are living in Lviv, and they are members of the Evangelical Church. They go to university and rent a room in Lviv. Father doesn`t support his family financially, so the financial state of this family with five kids is poor. However, he visits them from time to time because he misses them. He lives in the same village but in a different house. Mother is expecting her sixth child (a boy). After her last argument with her husband, she was so stressed that there was a risk of premature labor, so she was in the hospital. This family used to live on Father`s income. Mother worked as a postwoman before maternity leave. Lilia`s older sister used to help her family when she worked as a confectioner but now she doesn`t have a job. It is very difficult for them to cover all their needs and pay the bills. Lilia`s siblings take very active part in church: they sing in a children`s choir and attend Sunday school and drama lessons at church. This family lives in a three-room house with grandparents, who try to help their daughter and grandchildren as much as they can. The rooms are spacious. The living conditions are safe but there is a need to make some home improvements.

With the war in Ukraine men have been called to fight in the army.  Lilia’s father is being prayed for as are all the people of Ukraine. This mother of 5 daughters has made a strong stand to follow Christ and the price has been great.  Mother has encouraged older daughters to get an education and have the life they deserve. Sponsorship for this brave family will keep them encouraged and keep the younger ones fed.