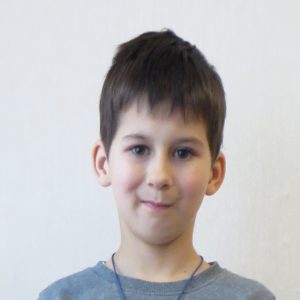 My name is Roman and I am nine years old. I live in Rivne Oblast.

Dear sponsor, I, Roman`s mother, would like to continue to write this letter. We live in Ukraine. My family consists of my two kids and me. My daughter Ivanka is seventeen years old and my son Roman is nine years old. Roman is disabled: he has congenital palate defect. He underwent surgery in 2014. Roman cannot speak well and suffers from physical developmental delay. Besides that, he has multiple dental appointments and treatments. Lots of teeth are missing. Now he just has six front teeth.

Roman goes to school for special kids. He already finished the first grade. I am very happy that he learnt to read and write a bit. He is worried about not being able to speak well and lagging behind his peers in development. He is also mentally unstable and gets depressed sometimes. He even consciously uses a black crayon when drawing.

Roman likes reading, counting and playing with Lego. Roman also enjoys watching cartoons and he is friendly and compassionate.

My daughter Ivanka finished school and entered National University of Water and Environmental Engineering where she studies psychology. I don`t work because I look after my disabled child. I receive disability allowance for Roman.

My husband does not live with the family. He left us when Roman was born. We don`t know where he is and we don`t receive any kind of help from him. He doesn`t communicate with his kids at all.

Roman needs constant care. I need to take him to school and walk with him. Psychologists and speech therapists work with him. I hope that his health will improve with time. Roman really likes bananas because they are easy to chew. He also likes eating varenyky.

We have a cat and Roman named her Asya. He feeds Asya and worries when she stays home alone. Roman suffers a lot from not having a father, so I try to comfort him as much as I can. I feel sorry that he was born disabled and his own father refused from him. Dear sponsor, we really need your help and I pray to God that you will pay attention to my son Roman. We will pray that God will show His mercy on us and that you will help us. Thank you very much for reading our letter. Goodbye!

Roman is a disabled boy who is sensitive and worried about not being able to speak well because of missing teeth (he just has six front teeth). Besides that, he is mentally unstable and all the pictures he draws are in black colors.

He goes to school for special children and he doesn`t have friends. He spends most of his time with his mother and sister.

Roman also loves animals. He is brought up by his mother because the father left the family the moment he knew that his son was born disabled. They don`t know where he is and he doesn`t help them at all.

Roman has an older sister who studies psychology at university. She is in the first year. Roman`s mother does not work because Roman needs constant care. He often feels depressed and does not want to eat or go to school.

In 2014, he underwent defect repair surgery (he was born with mouth palate defect). He will still have two surgeries in the future so that other people can understand his speech.

Ivanka, Roman`s sister, loves him very much. She helps him with homework, hugs him, feeds him and goes for a walk with him. Ivanka and her mother always try to create the conditions in which Roman can become more confident and smile more.

This family is very poor but are not discouraged. The mother receives disability allowance for Roman. Sometimes the grandma helps them: she gives away her pension so that Roman can have medical treatment. The mother cannot afford to buy high-quality food for Roman and it is a pity that Roman cannot have a varied diet. Roman really likes bananas and soft food  because they are easy to chew.

The family lives in their own apartment that belongs to the grandma, who went to work in Italy with hope to earn some money so Roman can undergo surgery. He really needs this surgery and he will have to undergo it soon. The living conditions are safe. However, some home improvements need to be made.

Mother and Grandmother are trying to provide a good home to their children. Sister Ivanka is a great example for her brother and is working hard a school to break the cycle of poverty in her family. Sponsorship will encourage the three generations of this family. They will enjoy the regular social contact with caseworker and monthly food packages.