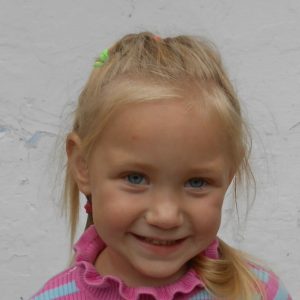 My name is Oksana and I’m Sofia’s mother. She likes playing with cars and dolls and her sisters, of course. By the way, she likes helping me vacuum/hoover the carpet. I have two more daughters, six-year-old Daryna and two-year-old Diana. They like playing with goats and dogs. Sofia can dance very well, Daryna prefers drawing and Diana likes listening to some fairytales or stories. The girls like when their father comes, and they’d like him to live together with us. We thank you in advance for your willingness to help us.

Sofia is an active, cheerful, persistent, and stubborn girl. She likes doing some gymnastic exercises and she can already do the splits. Sofia also likes dancing and playing with dolls and toy cars. Sofia`s mother has not had a good family life: she has already had three boyfriends and she has never been married. She had a daughter, Daryna, with her first boyfriend and two other daughters, Sofia and Diana, with her third boyfriend. Sofia and Diana`s father keeps in touch with the family. He is a calm man but he likes to drink alcohol, which Oksana, Sofia`s mother, cannot tolerate, and because of which they often have a quarrel. Sofia and Diana love their father and want him to live with them. Sofia`s mother and grandma are religious women and take the children to Catholic Church and teach them to pray and treat other people kindly. However, at the same time, they don`t really have close relationships with God and they are superstitious. The financial state of the family is poor. They don`t always have enough money to buy clothes and shoes and pay the bills. The kids often catch a cold and a lot of money is spent on medicines. Sometimes they have to borrow money to buy something to eat. The family lives in a small old two-room house. Oksana and her kids share one room. Another room is shared by grandparents and Oksana`s brother. The living conditions are safe.

Sofia’s father will be fighting in the war and it has been a long time since they have had a visit from him. They do not have the money or ability to travel to a safe country so they remain in Western Ukraine and find comfort in the monthly food package that we provided prior to sponsorship. Hart feels it is important to care for the poorest of the poor and this single mother with three daughters under the age of six is an example of living in poverty.  These beautiful girls will thrive with a sponsor to encourage them. Can you be that person?