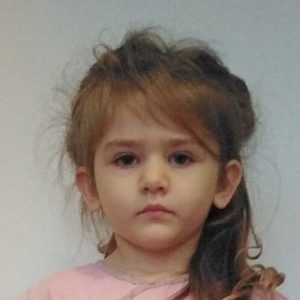 Sofia is four years old and she is very kind. She is very obedient and tries to do everything I teach her; she tries to put away her clothes and toys. Sofiia likes playing with LEGO and painting.

I started raising Sofia because her father, who is my brother, and his wife abuse alcohol. The child protective services have taken the other four kids from them. I raise Sofiia. The other four children are all together and are raised by a family of believers.

I have one daughter from my first marriage. Her name is Solomiia and she is thirteen years old. I also have two children, Emmi (3 years old) and Mykhailo (8 months old), from my second marriage.

My husband is a drug addict. He does not live with us, nor does he provide any kind of support to us.

We live in a room in a dormitory where the kitchen and bathroom are communal. Five of us sleep on two couches in this room because nothing else can fit into the room.

I am on maternity leave now looking after my youngest son Mykhailo so we all live on the child benefits from him. Sofiia does not receive any child benefit yet because the necessary documents have not been collected yet.

I will be grateful for any help.

Sofiia Sebestianovych`s aunt who is bringing her up

Sofiia is obedient and calm. She likes painting and playing with LEGO. Sofiia always puts away her toys and clothes.

She is raised by her aunt who has three own kids from two marriages. Her husband is a drug addict and he doesn`t live with them. No one knows where he is.

As for Sofiia`s family, her parents are deprived of parental rights. They abused and still abuse alcohol. Sofiia`s mother is in jail.

Sofiia also has four siblings who are brought up in the family of believers. At the moment, Sofiia does not receive any child benefit because the necessary documents have not been collected yet.

Sofiia`s aunt is on maternity leave, and the family lives on the child benefit for her youngest son Mykhailo. The financial state of the family is poor.

The aunt`s oldest child goes to school and the other three little kids need food and clothes on which a lot of money is spent.

They all share one room in the dormitory where the kitchen and bathroom are communal. There is little space. They have two couches, so two or three of them have to sleep on each couch.

This large family has very special relationships and  really needs your support. Sofiia`s aunt raises four kids on her own and it is really difficult to provide the children with the basics things without assistance.

This aunt and mother is doing the right thing by helping to raise Sofiia.  You can do a good thing by becoming a Hart Child Sponsor. You will make a difference in the life of not just one child who does not have a father figure but in the lives of four.  You can change the destiny of this child!