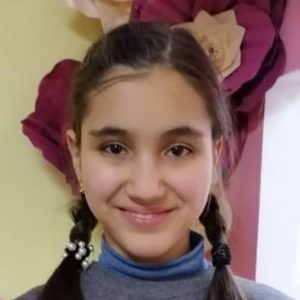 My name is Tamara. I’m 14 and I live in Lviv with my mother. She works in university. I’m in the 8th grade. I’ve got friends at school. Their names are Tania and Yaroslav. By the way, I attend Harmony Dancing Club and Kalynove Namysto (Eng. “Viburnum necklace”) After-School Club.  For Christmas we prepared kutya (ceremonial grain dish with sweet gravy), pampushky (sweet yeast-raised buns or doughnuts typical for Ukrainian cuisine), compote, herring, mushrooms, etc. Thank you for your willingness to help us!

Tamara can hardly do something without assistance, but she is diligent. She is not emotionally stable because of delayed mental development. Tamara receives inclusive education. She is also sympathetic, likes making crafts, and loves small children very much. Tamara quickly finds the common language with other kids but they don`t want to play with her because of her disease, which hurts her. She lives with her mother who has had serious health issues since a car accident. Father left his family when he found out that his daughter was physically and mentally  delayed. He is not interested in his child and does not help his family at all. Mother takes very good care of her child and tries to remain optimistic. Tamara and her mother go to Catholic Church on Sundays. Tamara sometimes attends catechetical school. Mother`s older sister helps them sometimes and looks after Tamara. Because Tamara is mentally challenged, she can be hysterical and cry loudly, which affects Mother`s emotional health. Tamara looks healthy but her slow speech and movements show that she suffers from delayed mental development. Her mother tries to be an active member of society: she seeks protection for the kids with special needs at the legislative level, tries to defend the rights of her child in social services, and seeks emotional support from the families with the same problems. Tamara`s mother is an associate professor at Lviv University. Grandma was a great support of the family but she passed away two years ago, which affected their financial state. Mother works part-time and her salary is very low. Tamara receives the disability allowance. Recently her mother sued her ex-husband so that Tamara could receive alimony, which  only enough for a few meals each month. They live in a three-room apartment which they bought 10 years ago on credit so are still paying a mortgage. The living conditions are safe. However, it is cold inside because they can hardly afford to pay the heating bill, so they live in one room.

Tamara and her mother really need your support which will show them how much God loves and takes care of them. How great it will be when Tamara knows that you are her sponsor.