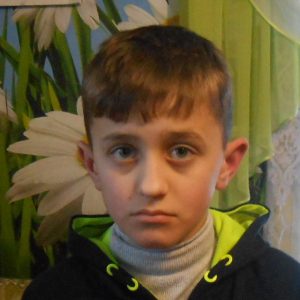 My name is Vitalii Hrechkosii and I’m 9. I go to school, I’m in 4th grade. My hobby is playing football. I have a brother Andrii and four sisters: Diana, Vasylyna, Snizhana, and Yeva. I have a lot of friends at school: Rostyk, Vladyslav, and Taras. We like hanging out and playing different games together during the break. My favorite lesson is math because I like counting and solving mathematical problems.

Thank you for your willingness to help us.

Vitalii is a very active boy who likes running and playing active games. He has a lot of friends. Vitalii also helps his mother do the housework: he chops firewood, feeds chickens, etc. At school, his favorite subjects are math and PE. Vitalii`s father died of a heart attack four years ago, so his mother raises six kids alone. Mother has felt despair and emotional pain since her husband`s death. Life was still difficult for this family with six kids when Father was alive but they got by. They had chickens and a cow and they worked hard, dreaming of their own house in the countryside. Later they bought one on credit but Father died, leaving behind his wife with six kids and unpaid credit. Mother had to sell the cow because she wasn`t able to look after it. There was a catastrophic lack of money, so she stopped paying credit. Because of that, now she has a debt, which is increasing all the time. It is extremely difficult for her to look after Vitalii’s sister Yeva who is also seeking a sponsor, who has cerebral palsy and needs constant attention. At night, she can be awake for two or three hours and sometimes the whole night. Yeva often suffers from seizures. She takes pills and injections every day. They have to spend most of their money on medicines for Yeva each month, which is a big sum. Besides that, Yeva she needs four diapers per day. Yeva cannot eat regular food because of stomach problems, so they have to buy baby food for her, on which they spend about $40 monthly. The income of the family is about $260 (disability allowance + allowance for the loss of the breadwinner) per month. This money is not even enough to cover Yeva`s needs.

Apart from Yeva`s health problems, Vitalii`s 14-year-old sister Snizhana has a brain tumor. Doctors said the tumor shouldn`t be touched at the moment, but Mother is worried that the situation may get worse. Snizhana doesn`t know about her health problems. Snizhana is a problem child: she is stubborn and has a difficult personality. Such behavior makes her mother sad and brings her pain. They often call Mother to school because of her daughter`s behavior problems.  Vitalii`s two older sisters, Diana and Vasylyna, are students: Diana studies to be a hairdresser and Vasylyna studies to be a cook. They need money for food and transport. Their mother is in despair because she doesn`t know where she can get this money along with the other needs. She already owes the school canteen where her kids, Andrii, Snizhana, and Vitalii, have lunch. They have all been ill with Covid and they could not afford to buy medicines. The family lives in a small two-room country house. The living conditions are safe. Vitalii and his poor family, especially her mother who is in despair, really need your prayers and support which will show them how much God loves and takes care of them.

With several sisters who need additional medical care Vitalii is trying to help as much as he can. But Vitalii is still a boy and he is still growing. Help this single mother to give her children the opportunity they all need to become an independent country family.  Be her partner as a sponsor to Vitalii and a friend to the whole family.