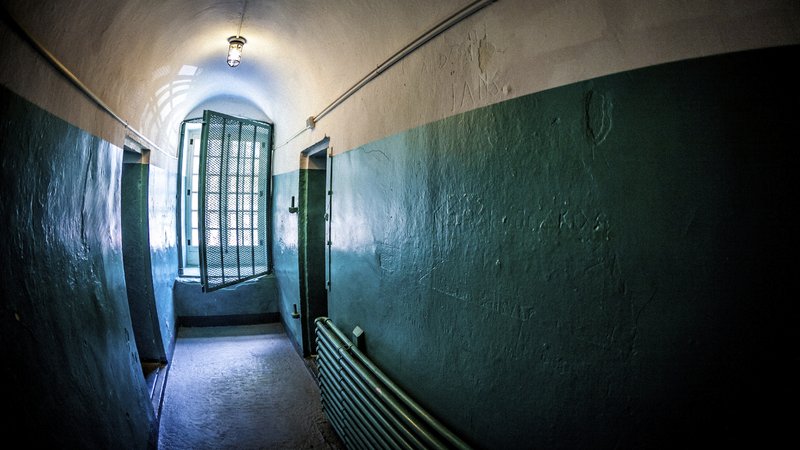 In the nineteenth century Fyodor Dostoevsky, one of the greatest Russian authors, referred to his own imprisonment as an existence in “the house of the living dead.”

It is into these harsh environments that HART and its dedicated Prison Ministry partners have been serving for the past twenty years.

As a result, I’ve witnessed many prison baptisms, and had the privilege of seeing clearly, the resurrecting power of the gospel – bringing life to walking dead men.

But the baptism I was about to witness today was different. For these were not ordinary convicts. They were ‘lifers’ in a maximum security prison for Ukraine’s most dangerous criminals. All of them have been convicted for multiple murders.

If not for Ukraine’s abolition of capital punishment several ago, each of the 27 prisoners in the eleven cells that comprised this deadly unit, would have been executed by now. Instead, they’ll spend the rest of their lives in deplorable Soviet style prison conditions.

Life outside their minuscule 6′ x 12′ cells consists of a daily, solitary 30 minute walk at night in the prison courtyard, a weekly shower (dripping pipe) and a phone call (telephone booth in a locked cage). Due to the nature of their crimes, they’re not allowed outside their cells without hand-cuffs and leg-irons.

Historically, the last room at the end of this 11-cell unit had a special deadly purpose. It had been the most terrifying place in this entire prison. Without any advance warning of their execution dates, prisoners were simply escorted into this room and summarily shot. 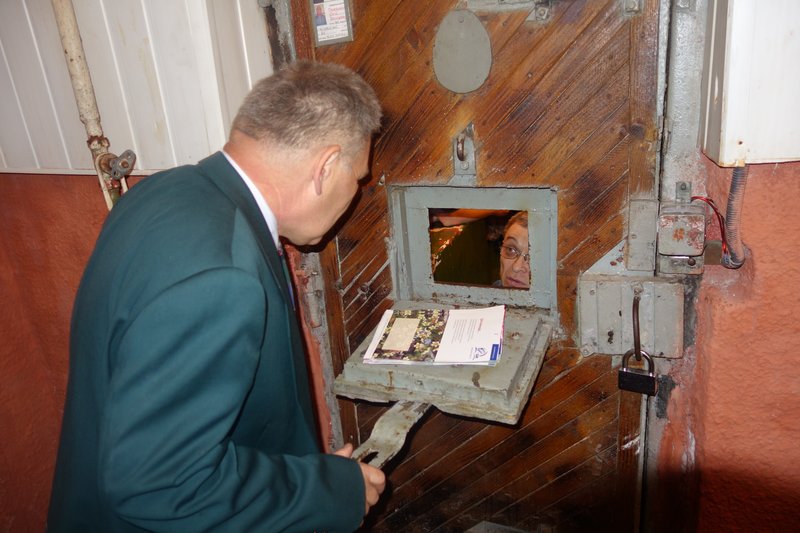 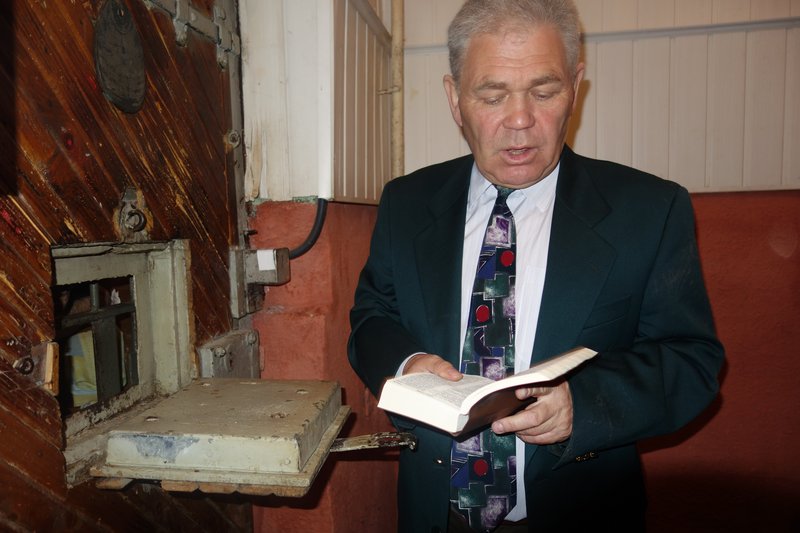 MOST DANGEROUS MAN IN UKRAINE
But this day was going to be a celebration of life, not death. And I wanted to be here because of Gregory – the most dangerous man in the most dangerous prison unit in Ukraine. It was his story that brought me to this prison.

I was intrigued when I first heard about a notorious killer, a mafia hit-man, convicted of murdering 18 people; ranked first place among the top ten most dangerous murderers in Ukraine – who had became a Christian while behind bars. His personal transformation was so dramatic, it had a tremendous impact on the prison’s warden.

So, when Misha Kenyo, a long-time HART partner invited me to join his ministry team for a Baptismal service of two inmates in Gregory’s unit, I readily agreed.

While prisoners from another unit were bringing buckets of water to fill the baptismal tub, we had time for three communion services at the cells of inmates who’d been previously baptized. 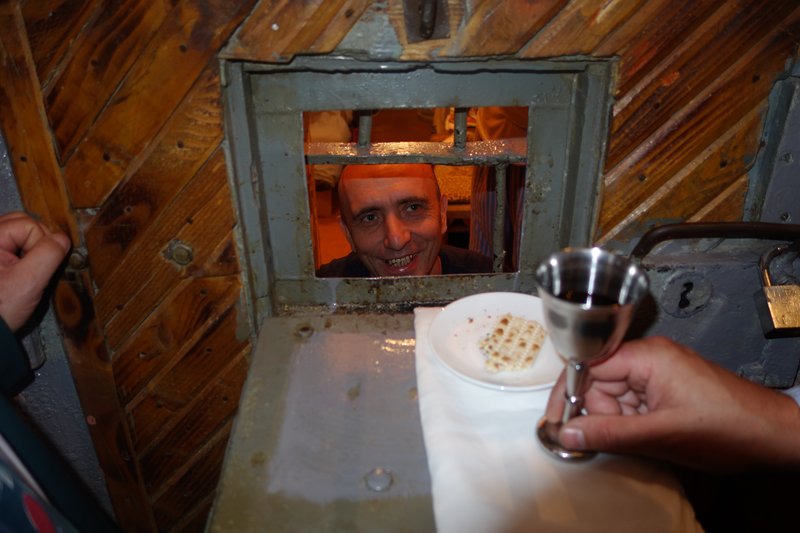 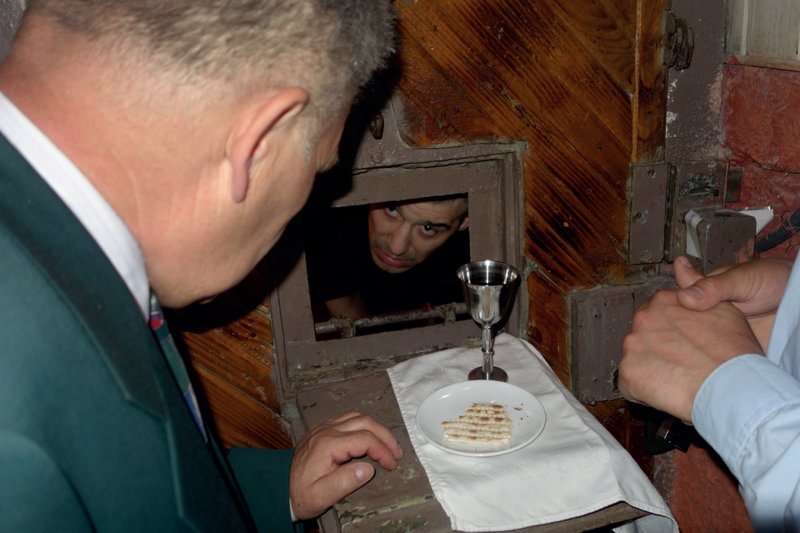 Pictures can’t convey the amazing connection we experienced with these men, as we partook of the bread and wine with them and prayed together.

At the third cell, I shared communion with Gregory. As I looked into his eyes, I was struck by their gentleness. They weren’t those of a vicious killer at all. I could see peace, even joy, and contentment despite the harsh conditions he would endure for the rest of his life.

I asked if I could take a picture with him. He was delighted. Despite objections from the guards, they eventually agreed to open the door. I walked into the cell of the most dangerous man in Ukraine and had a picture taken with my brother in Christ. 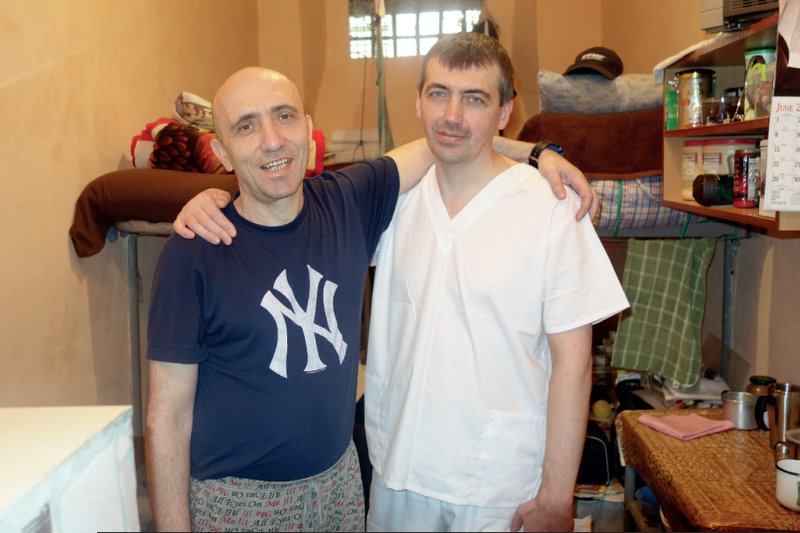 Gregory and cell mate who was about to be baptized 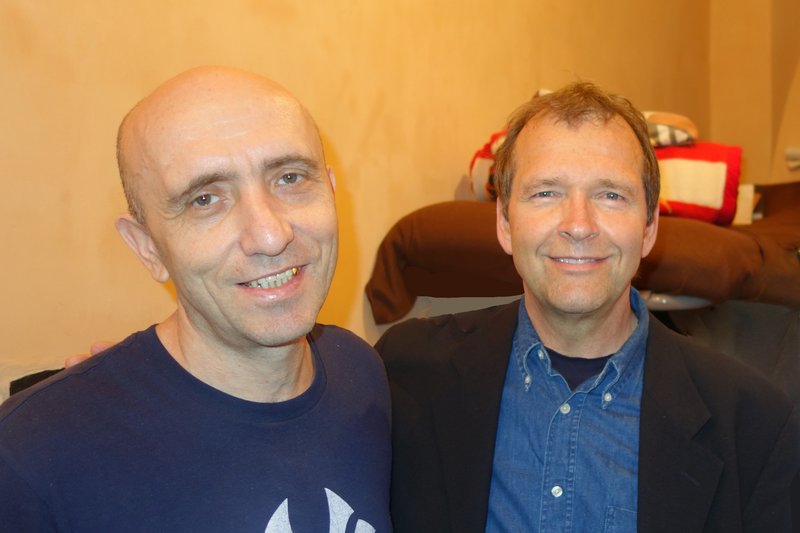 The baptismal was now filled with water and we proceeded with the service. Years earlier, inmates had to wear hand-cuffs and leg-irons during the baptism. However the warden has witnessed the changed lives of these men and on this day, two of them walked with us to the baptismal room unchained and free in more ways than one.

Taking turns, they eagerly climbed into the tiny makeshift baptismal, with barely enough room for one person to kneel in the ice-cold water.

It was a blessed time of joy, tears and celebration as Jesus’ resurrection brought these men back to life and hope and victory.

Ironically, the baptismal service took place in the former ‘execution’ chamber. This infamous room was now witness to a different kind of death – death to an old life. 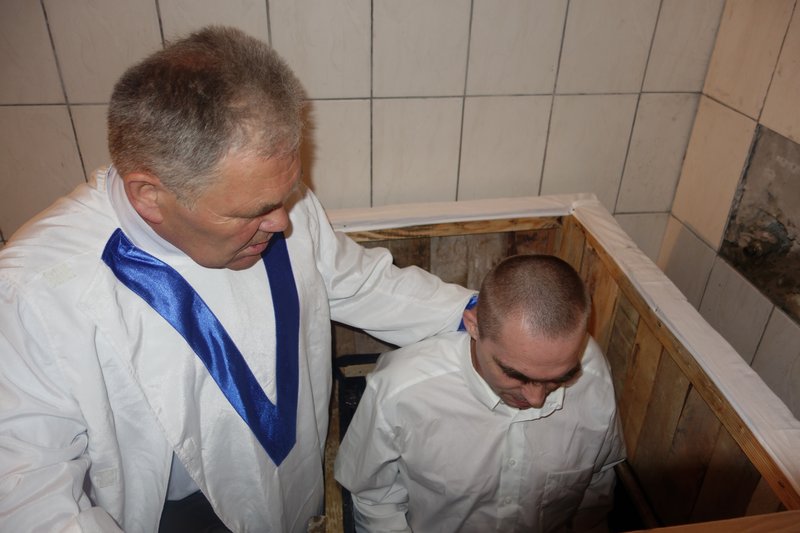 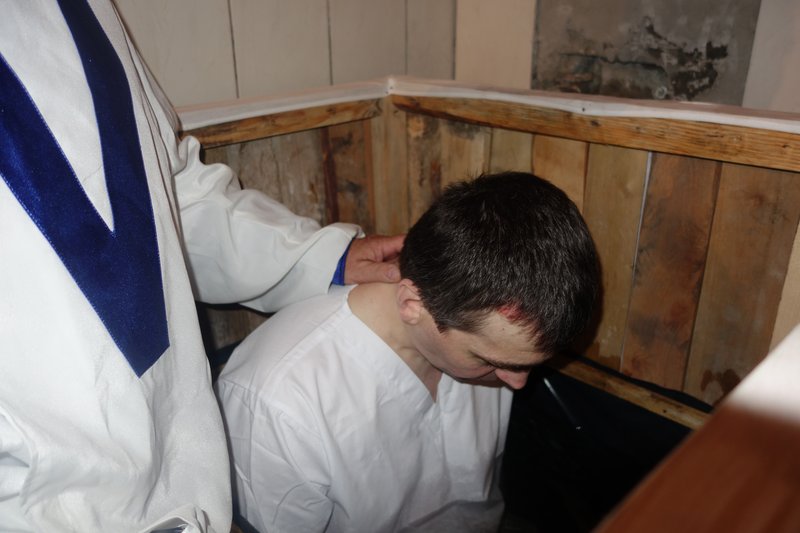 Tom Shrader, a great Bible teacher and friend of mine in Phoenix, would often say, the Biblical mandate of “Go into all the world and preach the gospel” is not necessarily a missionary call that implies all Christians are required to get a passport, tetanus shots and buy a plane ticket to a foreign country.

Tom would explain that in the true context of the Greek language in which this gospel was written, “What it really means is that each of us needs to go into ‘our world’ and preach the gospel.”

I can’t think of a better illustration of this than Gregory. For the rest of his life, his “world” is a prison unit, with eleven cells. The warden has given Gregory special favour and permission to rotate into a different cell each month. He uses this opportunity to share the good news of his new life and hope in Jesus Christ.

The two fellows we baptized this day were his spiritual children. One of the inmates we shared communion with earlier – was his spiritual child as well. Gregory’s ‘ministry’ should be an inspiration for us to fulfil our calling – to impact those in “our world.”

GREGORY GETS MARRIED
Gregory’s story becomes even more extraordinary. He is known for being the most dangerous murderer in Ukraine. She is just known as Larissa, a quiet American from New York.

“Weddings of prisoners have already become a normal occurrence for us, but this particular wedding was the first of its kind in Ukraine, and honestly, it was quite unusual, but love knows no borders.

Gregory received the following letter from his wife Larissa, whom he had not heard from in over 20 years. Gregory had come to follow the Lord ten years ago, while serving out his life sentence in prison. His conversion always struck him as a mystery. How could he change so dramatically?

But upon receiving this letter, he started to understand more of the story. It turns out that years before, across a wide ocean, Larissa was intensely praying for him.

Larissa’s letter: ‘Greetings Dzora, as I used to call you 32 years ago, when I was your wife. Maybe it seems strange to you that I am writing. Well, I want to share with you something very important.

Over the years my life has radically changed. In searching for happiness, I wandered through various countries, but every effort was unsuccessful. My soul was empty, disappointed. Eventually I stopped into a small church and heard about Jesus. It seemed to me that God Himself invited me to that service. He was crucified for me and He forgave me. He changed my view on life. I accepted Christ in 1996 in New York, and I was baptized in the Atlantic Ocean.

For me, church became my family. God has led me through various trials and situations, but it has been easy for me because of Him. In August 2000 I felt a strong urge to pray for you. It was the Holy Spirit who put the words on my lips, and I cried as I prayed for you.

In 2001 I visited Ukraine and had a huge desire to find you and tell you about the Living God. I came to Kiev, to the home of your relatives, but no one would speak to me. It didn’t work out to find you then. I returned to New York quite sad, but I continued to pray for you.

More than that, I have been praying for you for 7 years, but I knew nothing about you. I already had begun to ask God, “Why?”. And it was 3 days later that I heard a response.

It was unbelievable but true, as I was reading a Ukrainian language Kiev newspaper I saw your photograph, your last name, and the subheading “Killer Number One”. It explained all that had happened to you, but the main thing that I noticed was that you spoke sincerely of God. This was the confirmation to me that God is faithful!

Above all I understood that you are my brother in Christ. I want to ask you for forgiveness for all the evil I caused you, for the lies, for not making you happy, for the child that I didn’t keep. Forgive me. Please forgive me.”
Larissa

It was a long and winding road for Larissa to finally meet up with Gregory once again, a man who will spend the rest of his life in prison. Nevertheless they’ve accomplished their dream of entering a covenant marriage again, despite the difficult circumstances they both face. 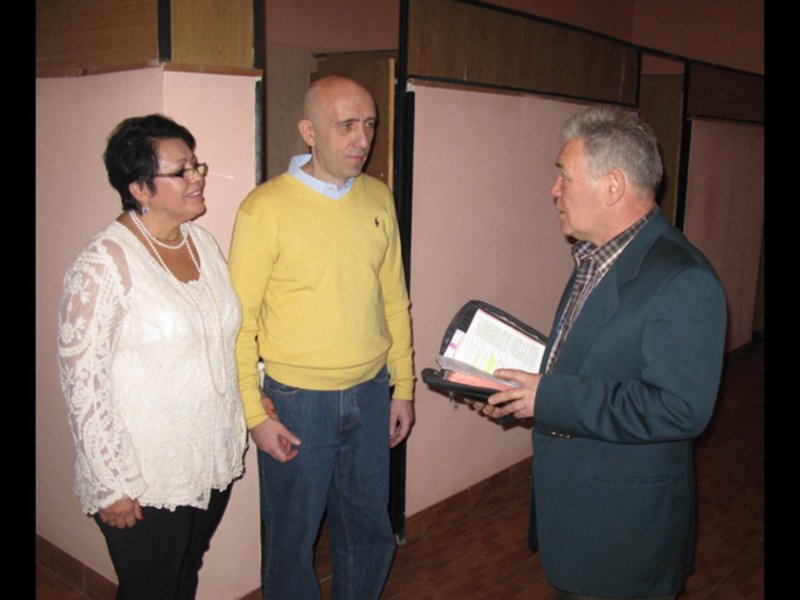 They were allowed to spend two hours together, and then she began her long, but joyful trip back to New York. Larissa’s goal is to return to Ukraine and live permanently in Lviv, in order to be close to her true love and husband Gregory. May the Lord richly bless them!” Misha Keno, New Life Church, Lviv, Ukraine.

How will YOUR support help these ministries?
They need resources for clothing, toiletries, food, vitamins, medicines, Bibles for the inmates; and especially for providing critically important support and care for the wives and children of these incarcerated men.

GIVE TO PRISON MINISTRIES