During the Christmas season, a HART team consisting of a chaplain, pastor, workers, and volunteers visited the front lines of the war in Eastern Ukraine to distribute food and clothing, share the Good News of Christ’s birth and to distribute Hart gift-boxes to children who live in these war-torn areas.

The following are excerpts from their journey to the ‘Front Lines.’

A CHURCH CALLED “THERE IS HOPE”

Our journey began with an overnight train ride from the city of Lviv in Western Ukraine, to the southern state of Kherson, which borders with Crimea. We meet up with HART partner Pastor Eugene, who will escort us on this journey. As we drive into his home town of Novotroitsk, we get a sense that time has stopped here.

Every lopsided white-brick house, every moss-covered asbestos-filled roofs, Russian store signs, pot-holed roads and rusty Lada cars harken back to the days of the Soviets.

Novotroitsk lies only 50 kilometres north of the Crimea peninsula (which Russia annexed in 2014), and about 300 km west of the front lines of the conflict in East Ukraine. Since the war first broke out in 2014, the town’s 10,000 residents live under the constant threat of Russian occupation, should the war expand.

Amid the hopelessness, fear, and destruction at the outset of the war, Pastor Eugene planted a church in this town directly in the cross-hairs of any further expansion by Russia.

The Church’s name ironically is “There is HOPE.” Despite its size, this small church community has had a big impact on the town. And for the last 5 years, Eugene has served both as pastor to the church and chaplain to the soldiers and civilians at the front lines.

“When you face the realities of war, death, corruption, unemployment—and even this dull everyday life in relatively safe Novotroitsk – hope is the last thing you see,” Eugene says. “But at the same time, it’s most desperately needed.”

Eugene says it is worth risking his life to bring help, encouragement, and hope to those enduring the dangers on the battlefront. “That is why my church’s name is a declaration that no matter what, our hope comes from God and is unbreakable.”

Our team left at around 3 am, hoping to reach the front lines (300 km away) in the morning. The only safe, or relatively safe hours to be on the roads in the conflict areas are from dawn until 3 PM In this window of time, there are fewer chances of being under fire and shelling. After 3 PM, even locals lock up in their houses and do not go out, unless they have an urgent reason to do so. Although most of the heavy bombing happens at night, there are no guarantees of safety during the daytime hours.

After nearly 7 hours of driving we were close to our destination. The sense of devastation and hopelessness that prevails most of Eastern Ukraine increased as we approached the war zone. Abandoned houses, unworked fields, and ruined farm buildings littered the landscape.

Every few dozen kilometres, we were stopped at military checkpoints and asked to report on the purpose of our visit. The fact that we were representing a church seemed to garner the respect and trust of the Ukrainian soldiers. 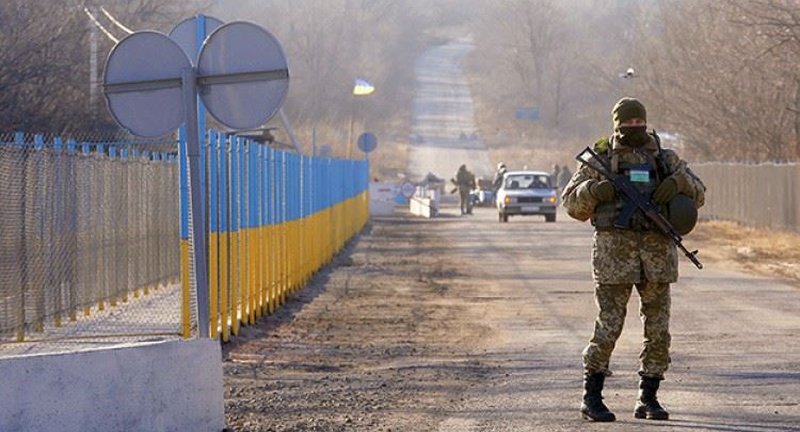 We drove by fields that were not used by farmers anymore because they’re riddled with land mines. “There were situations when a farmer went to work on his field, which he considered safe, and never came back,” said Eugene.“This war will echo for many more years, as people will keep finding grenades and mines in their gardens and fields.”

Its was hard for us to believe how some of the richest soil in the world contains mines, heavy artillery, and death – instead of seeds, potatoes, and life-giving crops.

Often times Eugene had to drive full-speed, even though the road was barely drivable, in order to avoid the potential of sniper fire. On both sides of the road, frightening signs with a skull and bones notified travellers that driving beyond the road’s shoulders is strictly prohibited. “There is no doubt that the fields over there are mined,” said Eugene, “But if you see the sign, it means that mines may be even in the ditch, right here beside us.”

We finally reached our destination – two war-torn towns – Mariinka and Krasnogorivka. These neighbouring towns are situated in a “grey zone” – a strip of land along the front lines between the Ukrainian and Russian occupied regions. They are only a couple of kilometres away from the separatists’ positions. From this vantage, you can see Russian soldiers digging trenches in the fields. 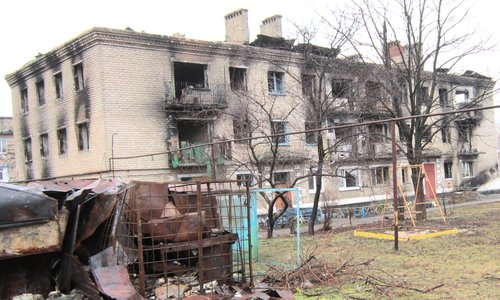 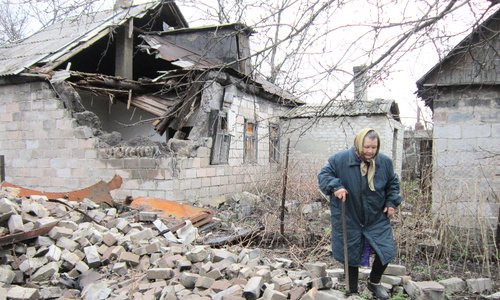 Because of their location, these towns have born the brunt of bombing and gunfire exchanged between these two combatants. Shelled and ruined buildings barely standing, are monuments to this catastrophe. Most of the streets are cut off from electricity and gas. The majority of the population has left, now refugees in other parts of Ukraine; the rest of the population, who either had nowhere to go, stayed.

It was extraordinary to see life still pulsing feebly in the midst of this terror. A few small stores are open but mostly devoid of inventory. Elderly women speaking in hushed tones at the street corners. Stray dogs barking. The very few kids still going to school passing by the windowless buildings, their fences and gates shredded by bullets. 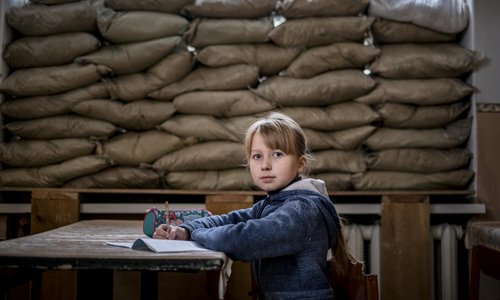 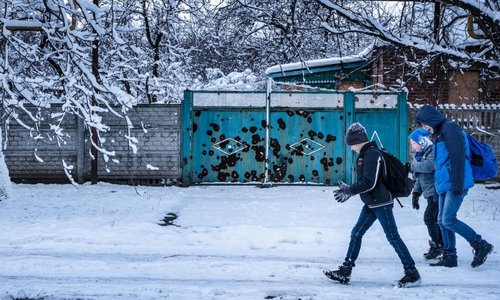 The school itself has transformed into some kind of a self-made fortification with sandbags laid at the windowsills to protect from bullets and glass splinters.

Most people in the village elect to stay home. When driving through the town, frightened and curious faces peek from the darkened windows, the nearly invisible shadow-beings of the “grey zone”. 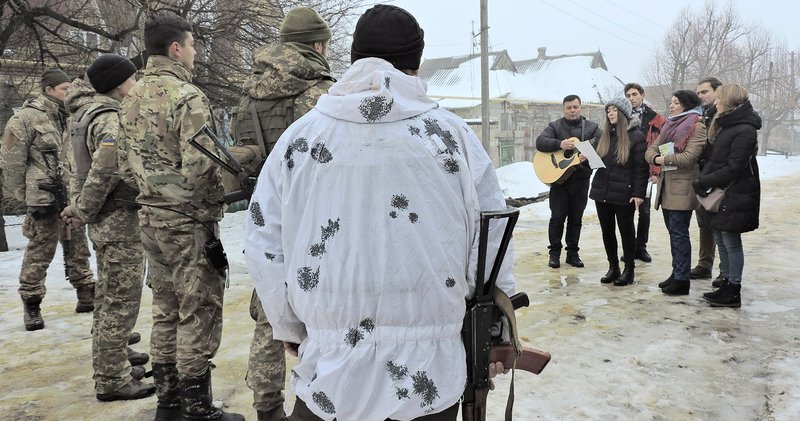 Our first stop was to visit Ukrainian soldiers at the outpost in Mariinka. They were stationed less than a kilometre away from the separatists’ positions. The young patriotic men greeted us warmheartedly. Here, at the very heart of the war, they rarely get good news or welcome visitors. Help, food, and warm clothing are also a rarity.

Our team shared the Good News that Christ came to Earth to bring hope to those in despair, wipe their tears, heal the broken, and most importantly, to save us from sin and give us the promise of eternal life. We sang Christmas songs and many of the soldiers, sang along through slight smiles, tears in their eyes.

Later, at another meeting with soldiers, Pastor Ihor from Moldova shared a powerful Christian story with the soldiers about an arrogant disrespectful son (a modern day version of the Prodigal son.)

The story is about a young man who continuously rejected his parents’ faith. He would even mock them, saying, “You don’t anything about real life. Your faith is old-fashioned and of no value to me.” After his father died, the boy left home and was led astray by a sinful and selfish lifestyle.

Many years later, broken and worn-out by his destructive lifestyle, he discovered his mother was seriously ill and also that she had been praying for years that he would finally return home. The son immediately made the journey to his home village, hoping to see his mother and ask for forgiveness. However, she wasn’t at home. He could not find her.

Although it was evening and dark, he went to visit his father’s grave at the cemetery. By the light of the moon he noticed a fresh mound of dirt next to his father, and realized it was his mother’s grave. He fell to his knees, praying to God, having realized how much time he’d lost and how much he needed God’s forgiveness.

The soldiers listened to this poem intently, their eyes glimmering with tears. There are two things every soldier thinks and talks about when looking into the face of death: Mom and God.

This poem touched their hearts as no sermon could have. The soldiers did not want to let us go. They gave us tea and biscuits, trying to give something back as a token of their gratitude.

There aren’t words to describe how special these rations tasted, especially knowing that the soldiers don’t have an extra food and, perhaps some time in the near future they might for this tea to warm them up and stay awake much more than we did then.

When we left the soldiers Pastor Ihor said, “I didn’t plan to tell this poem to the soldiers. I was thinking of a nice, theological sermon. Somehow, when I opened my mouth, this poem was the only thing on my mind. God knew that it would touch their hearts.”

One of our objectives on this trip to the war zone was to visit the children in Krasnogorivka village. There, we would organize a small Christmas celebration for them and give them Christmas gift boxes prepared by sponsors and volunteers from Canada.

The former ‘House of Culture’ in Krasnogorivka now serves as an Evangelical church. Mercifully, the beautiful building had been spared most of the shelling, but sustained some damage to the roof. The local church is thankful for the blessing of a gathering place during such difficult times.

The pastor of the church and a handful of volunteers invited more than a hundred children, along with their parents (mostly non-Christians), to come to the church and meet our team. The children were beaming with joy, appearing overwhelmed that people would organize such an amazing Christmas celebration for them.

During the program, we sang with the children, played games, and involved them in different activities. Pastor Ihor had prepared a special interactive sermon for them called “The Greatest Gift,” complete with illustrations. After giving the children a chance to guess what the greatest gift for all kinds of different people could be, he explained that the best and the most precious gift is given to us from our Heavenly Father—the salvation that comes from Jesus Christ.

Although the children hugged us as if we were old friends, their parents were much more reserved. Constant fear and grief had marked their faces with distrust. They seemed to find it difficult to smile, as though there was no reason to in their depressing reality. When they were later asked to smile for a group photo with our team, only some slightly raised the corners of the lips, but remained frowning.

The children’s hardened faces lit up as they opened their HART gift boxes. Some of them hadn’t had a Christmas gift since the war began in 2014. Others had never even heard of such extravagance, as their parents could not afford gifts. Our hope is that these boxes remain proof in the children’s memories that they are loved. Not forgotten. Not abandoned.

Thanks to the generosity of HART donors, we were able to share joy and hope with children whose childhoods have been stolen by war. We strongly believe that the greatest gift both kids and parents carried home that day was in their hearts—the unbreakable hope and love of Jesus Christ.

On our way back, Eugene suddenly stopped the car on the road that connected Mariinka and Krasnogorivka. “Listen,” he said. “Such silence is not a common thing here.”

He shared with us how extraordinary it was not to hear a single gunshot during the time we were at the front. God had miraculously protected us and proved that He never left our side – as we delivered a little bit of “HOPE” to those living at the front lines.

Please consider supporting our Relief Aid ministry partners working with refugees from this war and with those who are living in the war zones.
How will YOUR support be used to help these ministries?

GIVE TO REFUGEE AID MINISTRIES