“When I was a little girl, I wanted to be a veterinarian. My heart always melted when I saw stray dogs and cats. They seemed so vulnerable and unprotected. They needed somebody to shelter, feed, and take care of them. And I thought that I would be the one to do this. However, when I grew up, I realized so many people are even more vulnerable. They are broken and wounded, seeking shelter, understanding, and support. Some are lost and desperately in need of a helping hand to direct them back on the right path…”

In 2020, Ulyana wrote these words in her application letter to HART’s Education Scholarship Fund. She aspired to become a psychologist so she could help people. Thanks to HART donors, her dream came true, and she is now a university student.

However, there was a time in her life when she and her mother needed a helping hand. And if it weren’t for God’s mercy and two compassionate people from Canada, Ulyana’s life would have taken a completely different turn.

RESCUED FROM THE FIRE

Ulyana didn’t know anything about her father, except that he abandoned her and her mother, Irina, when she was very young.

They lived in a small town in eastern Ukraine, near the city of Dnipropetrovsk. Irina tried her best to love, care and provide for her daughter; however, she struggled with the complex challenges of being a single mom – as well as the emotional stress of her husband deserting her.

When Ulyana was just a few years old, Irina fell in with the wrong crowd and began drinking heavily and using drugs. With their lives falling apart, she used her addictions as a coping mechanism to forget her responsibilities and everyday problems. During those dark times, Ulyana would suffer from fear, hunger, cold, and rejection.

Some people from a local church who knew the family were determined to help this mother and child by getting them off the treacherous road they were on.

They contacted the ‘ARK’ Church in Novovolynsk (western Ukraine) to inquire if Irina could be accepted into their Womens’ rehabilitation program and if Ulyana could live at their ARK Christian Orphanage. (The Church, Rehab center, and Orphanage were all HART partners.)

It was difficult for Irina to abandon her careless lifestyle; nevertheless, she agreed to move, and this decision marked a new beginning for the family.

If it weren’t for God’s mercy and two compassionate people from Canada, Ulyana’s life would have taken a completely different turn. After their 1,000 km journey brought them to Novovolynsk, Irina began her treatment at the rehabilitation center, while Ulyana lived at the ARK Orphanage with about 30 other children. With both of them in Christian environments full of love, prayers, and support, it wasn’t too long before Irina and Ulyana took the first steps of transformation towards knowing and accepting Christ.

ULYANA GETS A SPONSOR

“Now in the ARK orphanage, Ulyana has become calmer, kinder, and more disciplined. She is a diligent girl and helps around our’ home’. Uliana and her mother attend church services and pray sincerely. By sponsoring this young girl, you will assist in the transformation of their lives.”

Lilia, also HART’s Child Sponsor caseworker in the region, wrote these words prayerfully, hoping that someone from HART’s ‘community’ would sponsor Ulyana. Her prayers were soon answered!

Glenn and Valerie (from Vancouver, BC) still recall the day they first saw Ulyana’s picture. It filled them with gratitude and love. “A few weeks after we attended our first HART fundraising event (and signed up to be Sponsors), we received a photo of a young girl that included the comment that because she was a little older (grade six), she had not been sponsored yet. I think we fell in love with her instantly, and excitedly began our sponsorship of Ulyana.”

Ulyana immediately felt this connection too. She was so grateful to have somebody who cared about her and supported her faithfully. Glenn and Valerie became her friends and family. “I can’t stop thanking God for you since you became part of my life” – Ulyana wrote to them in one of her letters.

They would exchange many letters, send Christmas and Easter greetings, and also precious pictures. Glenn and Valerie knew about Irina’s struggle with alcohol addiction. Every time they sent a Christmas box for Ulyana, they would include a small gift for her mother to encourage her and let her feel love and acceptance.

“A few weeks after we attended our first HART fundraising event, we received a photo of a young girl…I think we fell in love with her instantly, and excitedly began our sponsorship.”

TWO LETTERS THAT CHANGED EVERYTHING

With God’s blessing and their Sponsor’s support, Ulyana and her mother continued their journey of transformation. Irina quit drinking and started helping out at the ARK orphanage, while Ulyana improved her school progress and made new friends.

Their lives were getting back to a new and healthy normal. But as the rehabilitation process ended, it was time for them to go back to their hometown.

Glenn and Valerie received a letter from the HART office informing them they no longer needed to sponsor Ulyana. The family situation had changed for the better, and they would be moving back to their home in East Ukraine, 1,000 km away.

(Note: without a HART caseworker in a particular region, it typically is not feasible to continue the Child Sponsor program. A HART caseworker’s role includes providing ongoing counseling and to ensure accountability for each family’s financial support.)

“This was devastating for us,” says Valerie. She remembered how they felt the day they received this news. “We felt that it wasn’t right for us to stop our relationships with this family. We felt quite strongly that God was telling us to continue being by their side. So we wrote to HART to see if there was any way we could still support Ulyana and her Mom even though they would no longer be in Novovolynsk.”

After several days of praying and hoping for the best, Glenn and Valerie received a second letter.

“We were informed that despite the long-distance, in response to our petition, ARK’s director (Liliya) said she and her church were willing to take on the task of monitoring the family situation and remaining in contact with Ulyana and Irina. Therefore, we would be able to continue our sponsorship. God answered our prayers! We continued our sponsorship!”

To this day, Glenn and Valerie keep those two letters as a memory of how God tested their perseverance and faithfulness.

The first letter brought disappointment and pain; while the second proved to them that God will always make a way for those who are willing to care for others and do what pleases Him.

“We felt that it wasn’t right for us to stop our relationships with this family. We felt quite strongly that God was telling us to continue being by their side.”

After a few years at ARK, the transition to a new life in their hometown was quite challenging for them. Irina was determined not to go back to her old habits.

She found a job and rented an apartment, while Ulyana went to a local school and started making new friends. They started attending Sunday services at a local Evangelical Church and continued staying in touch with Liliya and Ulyana’s sponsors.

Two years would go by, until one day, Liliya received a desperate call from Irina. “We are coming back, Liliya,” she said. “We miss our church. Our true family is at the ARK with you.”

The conversation left Liliya touched and speechless. She later learned that Irina’s old friends reappeared in her life, and she couldn’t resist the temptation. She started drinking again and began quickly drifting away from God and their church.

The only things that prevented Irina from completely going back into drugs and alcohol were the sincere, caring letters and financial support from Glenn and Valerie. Their encouragement and faithfulness were a reminder that God was still knocking at the door, waiting for His children to open it.

Irina realized that she was too weak to face the temptations on her own. She needed the support of her spiritual family, so she and Ulyana decided to return to the ARK.

Glenn and Valerie claim sponsoring a child is one of the biggest blessings in their lives. 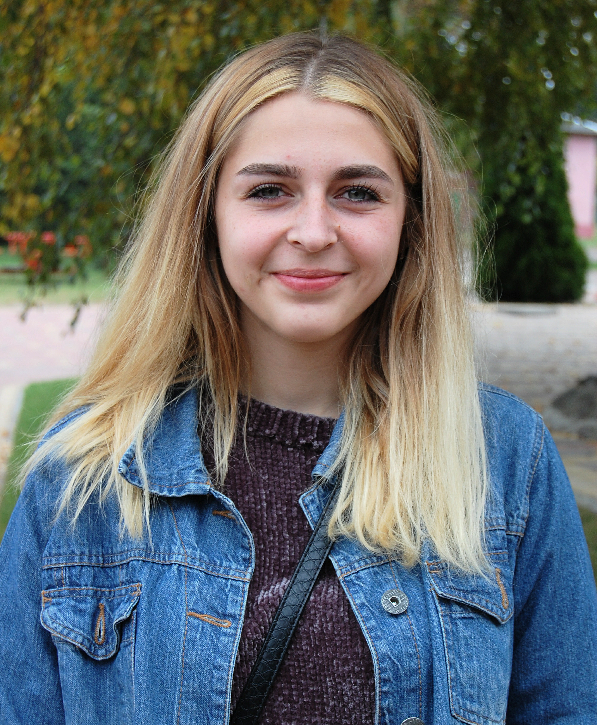 Sometime after they had re-settled in at the ARK, HART facilitated Glenn’s trip to Ukraine, where he was thrilled to have the opportunity to finally meet Ulyana.

Ulyana was also very excited to meet her faithful friend and sponsor in person. By that time, her mother had been baptized and started working at the ARK’s bakery.

Glenn and Valerie claim sponsoring a child is one of the biggest blessings in their lives. “Our thanks are not enough to express how grateful we are to HART. HART provides the foundation, infrastructure, and an amazing team built by the founder Lloyd Cenaiko. We could have never imagined this opportunity to become involved with changing hearts and lives in Ukraine.

Someday, we hope that another opportunity will permit us to see Ulyana again, but mostly we pray that she and her mother will have good lives with Jesus in their hearts.”

EPILOGUE:
Ulyana applied for and received a HART Education Scholarship Grant and is currently enrolled in university.

Your generous support has allowed Ulyana to follow her dream to become a psychologist who can help those who “are broken and wounded, and desperately in need of a helping hand…” – just like Ulyana and her mother were!