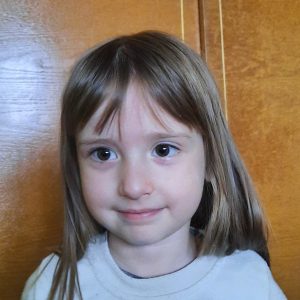 Oksana, a case-worker, is writing to you on behalf of Olha Aliyeva. She is three years old and lives in Lviv city. Olha lives with her mother and older brother. Her father visits her sometimes. Olha loves her older brother Serhiy very much. He is 14 years old and he is in the eighth grade. Olha likes to spend time with him playing games, walking outside, and telling interesting stories. Olha`s father does not work, nor does he take care of his children. He also abuses alcohol and rarely comes home. Even when he finds a job, he doesn`t have it for a long time. The mother doesn`t have a permanent job. The company where she worked as a janitor has been closed. On Christmas, Olha and her family visit their relatives. They also prepare for this holiday in a special way and celebrate it at home. Olha attends daycare. She goes there on foot because the daycare is near her home. She spends there about 5-6 hours. Olha likes various activities at daycare, especially music lessons because she likes to sing and dance. She also likes to paint, go for a walk and play with other kids. Olha eats everything her mother cooks for her. Her favorite food is fried potatoes with sour cream and fruits, especially bananas and apples. On holidays, the mother always tries to cook something tasty: she bakes mini-cakes or an apple pie, and she also cooks salads.

Olha wants to be a doctor when she grows up. She “treats” her dolls and older brother – this is her favorite game.

The family is deeply grateful for support and help in advance. They hope that you will become their good friends. They dream of having special people in their life who can care and want to understand them.

Olha and the Aliyev family

Olha is a very active and smart girl. She is three years old and already knows many short children`s poems. Olha likes to paint and play with dolls and always wants to help her mother in the kitchen. Mother Snizhanna got married for the second time and gave birth to Olha. She thought that her husband would stop abusing alcohol but nothing changed. Olha`s father doesn`t want to accept his 14-year-old stepson Serhiy, so they often quarrel because of that. After these arguments, father Oleh usually disappears and nobody knows where he stays and what he does. Sometimes the communication is so difficult for the mother that it seems they will never have peace in the family. The mother received child allowance until Olha turned three but she doesn`t receive it now. The father does not support his family financially, nor does he care about them. Mother Sniazhana is looking for a job. She has already had numerous interviews but nobody wants to give her a permanent job because she has a little child. Olha attends daycare only when her mother can pay for it. The living conditions of the family are poor as they try to get by each day. When the father is drunk and comes home, he starts breaking things.  They also have some debts because they haven`t paid for utilities and this winter was very cold so the debt has increased. The mother has to choose between buying food for her kids and paying utilities. She lives in constant fear for the future. She has asked different services for help but no one wanted to help.

The Hart Child Sponsorship program will be a great benefit to this family. Sniazhanna is trying to create a good family environment for both her children and her husband.  Olha is only three and will have a happy childhood if her mother can keep her and her brother fed and active. Olha is too young to understand the hardship her mother faces day to day but will see the smile on her face when the food packages are delivered by the caseworker in the near future.