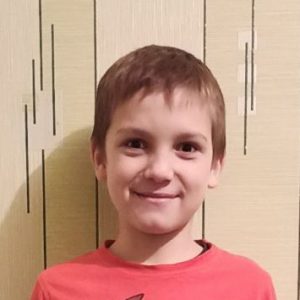 My name is Roman and I am eleven years old. My father works as a car mechanic. My mother works in a sewing shop. My best friend is Stanislav because I have known him since I was very little. We like to play soccer together. My father and grandparents are getting ready for Christmas. I also play games with my friends and visit church camps for summer holidays. I am in the sixth grade and my father takes me to school. I usually spend 6-7 hours at school. My favorite subjects are geography and math. At school, I study such subjects as biology, geography English, Ukrainian, Ukrainian literature, world literature, technology and design, music, PE, and art. I like to eat a bun and drink tea. At home, I usually eat holubtsi (cabbage rolls). At Christmas, I like to eat sweets, cookies, and sausage. In my free time, I like to call my friends and ask them how they are doing.

I want to be a car mechanic when I grow up.

Thank you very much for helping my family and me!

Roman is an introverted and silent boy who likes playing with pets more than with friends in his free time. He attends a technology and design after-school club and likes to go fishing and pick mushrooms. His family used to be a usual family but it fell apart after Roman`s father started taking drugs. Roman started living with his mother, grandparents, and mother`s boyfriend (mother often changed boyfriends). Roman`s father has gone through rehabilitation and come to know and accepted Jesus.  The relatives from the mother`s side started mocking Roman because he attends Sunday school and reads the Bible. Roman`s father lives with his parents in the village near Rivne city. Roman`s grandma is a believer and they read the Bible together. The father takes Roman to school and Sunday school. In his free time, Roman spends his time with the father in the garden, fishing, and walking in the forest. The family lives on the grandparents` low pensions and father`s minimal salary. The father cannot find a better job because of a medical condition. The income of the family is enough to cover only the most basic needs. The family lives in an old house in the village near Rivne city. The toilet is outside. The living conditions are safe. The father has started redoing the house so that his son can have better-living conditions.

Roman and his family will have many benefits from the Hart Child Sponsorship Program. They will receive food packages and have funds for other expenses. Roman will continue attending church and church events at the local church and see the caseworker.  Summer Camp is a program where Roman will be encouraged by other children.